THE LATEST FROM NWE 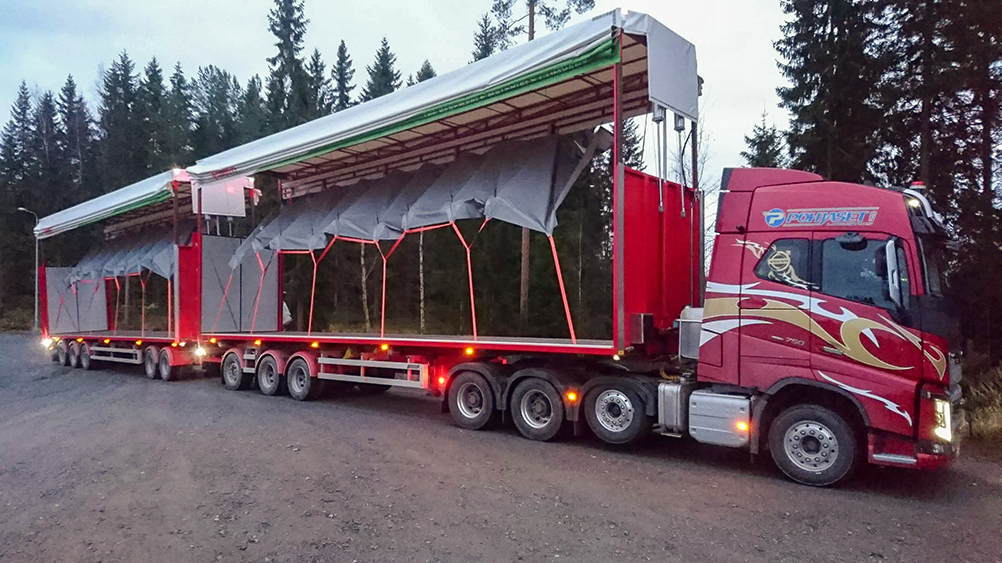 – When we started planning the purchase of the 34,5 meters long HCT (high capacity transport) truck, it was clear from the beginning it would be equipped with FIX Truck-Safe® cargo securing system, tells Risto Pohjanen from Pohjaset Oy transport company in Keminmaa, Finland. – Our HCT truck drives several times a day from Kemi with 110 cubic meters timber to Oulu and on the way back with 64 tons cellulose packed in bales from Oulu to Kemi. Therefore, a fast and reliable securing system is a must, he continues.

NWE Network Engineering Ab, a company located in Närpes in Finland has registered a patent for its FIX Truck-Safe®-system, which consists of the load-securing cover, which is suspended on rails on the ceiling of the cargo space, and which is automatically pulled tight over the load at the push of a button. This eases the job for the driver as well as improves job security as the driver no longer needs to climb to secure the cargo, Pohjanen tells. The cover also keeps the cargo firmly at its place.

One of the biggest single benefits of this cargo securing system is time saving, continues Pohjanen. – The traditional way of securing with straps manually can take up to one and a half hour in a truck of this size. With FIX Truck-Safe® system the securing of the cargo takes from seconds to a few minutes and the whole loading of the transport only half an hour. In one single day the saving in time is hours and the system pays itself back very quickly, he continues.

In autumn 2018 during the last drive of the day the HCT truck was involved in an accident as the road became slippery due quick change in weather. The trailer started swerving and hit a wire rope fence, the fence got stuck in the trailer and hit a car passing by. However, the cellulose bales moved only a 5-10 centimetres during the swerving and the driver recovered the control of the truck quickly. – We are certain that had the cargo moved, things had gone worse, the securing held and kept the bales from moving and so the driver was able to control the truck better, says Risto Pohjanen.

Cargo securing system is chosen depending of the load

NWE have a long experience on cargo securing systems both at sea and on land. Whatever you transport NWE find the best and suitable system for securing you cargo and making transporting safer. The cooperation between NWE and Pohjaset Oy has continued with other cargo securing solutions, of which we will publish one article more later in the spring.