Once a load is allowed to start moving it becomes virtually impossible to stop it turning into some kind of battering ram!! Very often the cargo pack can be higher than the front bulkhead and or set at a distance from the front bulkhead due to perhaps weight distribution reasons. In either situation there will be open space in front of the cargo where it will not be contained and be free to move. Top over ‘friction’ lashing straps will work well with many types of cargo however directional lashing will need to be added for some loads.

If the load comprises steel pipes or rods and only top-over friction lashings are used then there is a very definite danger that some elements within the load will start to move when the vehicle slows and or brakes are applied. This is due to the Friction coefficient of metal pipe or rods being quite low, around 0.2, which directly limits the ability of top-over lashings alone to apply sufficient lashing force. It is essential to lock together and retain all the elements within the structure of the cargo pack. Even if the top layer or corners of the cargo stay in place some of the other elements within the structure of the load may be free to move due to a low friction coefficient between the cargo elements. 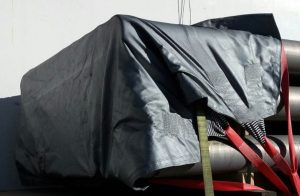 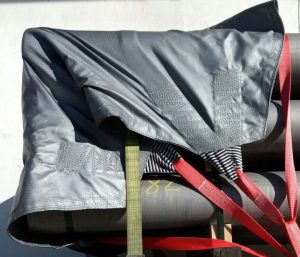 In the photo the yellow strap is an indipendent top over lashing strap not connected to the fabric. The red webbing load straps are an integral part of the FIX Steel direct lashing system.

Equally challenging loads can be, for example, sheet metal, girders, timber, machinery to name only a few. Some form of additional restraint is therefore required to stop and block the cargo before it can start to move. Possible solutions include direct lashing methods as the FIX example shown above or temporary bulkheads or other mechanical methods that are suitably load rated and that can be positioned in effective proximity to the cargo to control it. Of these 3 options direct lashing offer the greatest flexibility – they can accommodate a wide range of varying load positions, are easy to install – fitting directly to the load, attach to standard deck mounted lashing points, and can be stowed away in the tool box when not in use.  It must be noted that all cargoes need to be assessed individually to ascertain the possible danger that they may represent to enable selection of the correct securing system.

One of Northern Europe’s most recognized experts in load securing - Kimmo Weissenberg - helps you optimize your cargo fastening.

Download Kimmo’s calculation model to find out instantly how to optimally secure your load. Modes of transport, volume, loading layout, and friction factors; this calculation takes it all into account. You won’t find a more comprehensive tool.

Fill in your email address here to receive your calculation.

*you will also be signed up for our newsletter